OUr source: The Salutaris Foundation

There are dozens of sources available to demonstrate this, but we will focus on an exemplary inscription from a benefactor named Salutaris. The foundation is from 104 AD and made possible by Salutaris, who was born a Roman citizen and a member of the equestrian order. Even before this benefaction, he was a citizen of Ephesos and a member of the city council. Salutaris chose to show his munificence not by financing a new public building, but by creating a lottery and a procession.[3]

The inscription was inscribed on a wall of the south entrance of the theatre. The text itself would have been pretty difficult to read for passersby. The letters were to small and the inscription itself too high for easy reading. Apparently, the exact details weren’t important enough to let everybody read it every time they walked past. It was probably more a symbol of his generosity, having an inscription in such prominent and publicly important place. The realization of this inscription was a legal process which symbolized and legitimized the power relationships of the city, province and empire. It was a two way street, not an instrument of oppression. Members of the elite like Salutaris who wanted to make such a benefaction first had to negotiate with the non-council citizens about terms; they couldn’t simply put it up and dismiss the people’s wishes. 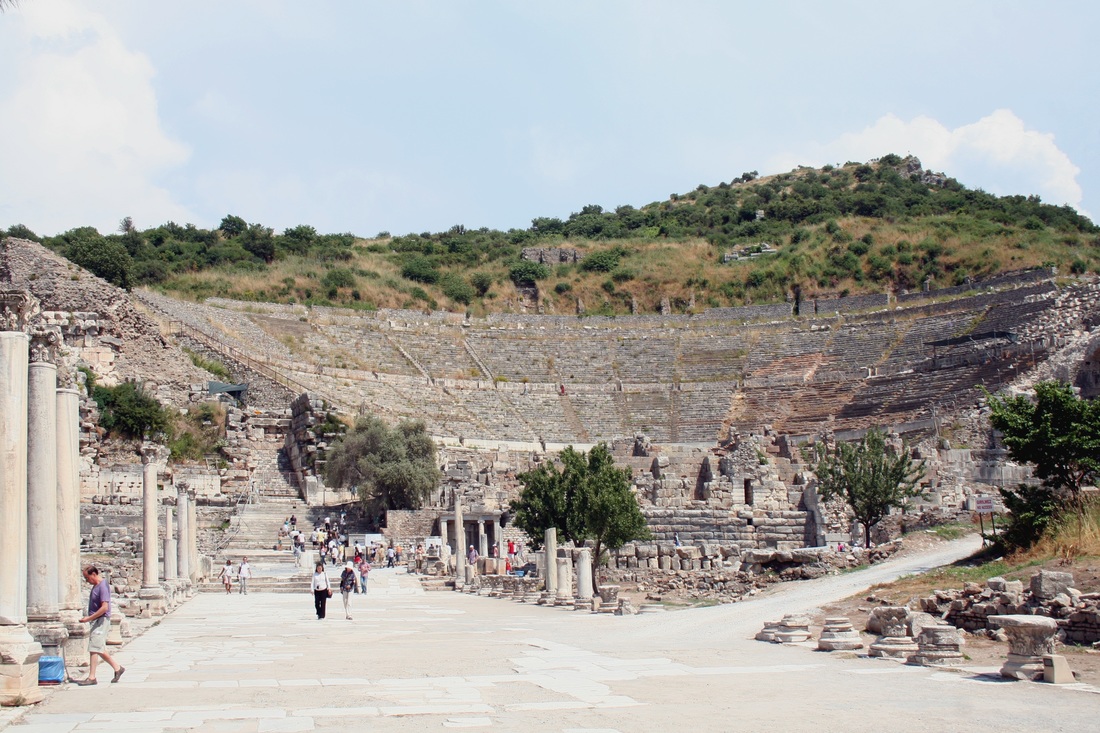 One way in which the Salutaris inscription shows us how identity was formed through munificence is the hierarchy of the recipients of his lotteries and distributions. When you look at the percentages of received gifts you notice that the members of the tribes were the highest in the civic hierarchy in Ephesos, which was a group of around 1500 citizens. This refers to the foundation story of the city; these tribes were the original settlers from Athens who followed the advice of the oracle. So not only does it have a historical background, but also a divine one. After them came the wealthy and prominent men of the city council and the gerousia (council of elders). The ephebes (adolescent men) also formed an important part of the civic hierarchy, but this may be more a way of acculturation in order to make sure that the young men knew their future place and identity in the city and how the political hierarchy came to be. However, certain groups were also omitted. For example, the guilds and other groups weren't mentioned at all, while they were very important for the wealth of the Ephesos. This may have been a clear message from the Ephesian aristocracy: Keep your place, outside politics.

​We have seen how the Salutaris inscription can inform  us about the way public benefaction works. The procession, lotteries and distributions show us that the ruling elite tried to promote their ideal city hierarchy and identity by focusing on the religious, historical and mythical background of Ephesos, to acculturate the future generation of elites, and to incorporate Rome and the Roman emperor into the worldview and identity of the citizens of Ephesos.

​​1)For an introduction to the history and findings of Ephesos: Peter Scherrer, Ephesus: The new guide (Turkije: Ege Yayınları, 2000).
​2)For a detailed description and some case studies on euergetisme in Asia-Minor: Arjan Zuiderhoek, The politics of Munificence in the Roman Empire: citizens, elites and benefactors in Asia minor (Cambridge: Cambridge University Press, 2009).
3)For the Greek text and the English translation: Guy Maclean Rogers, The sacred identity of Ephesos : foundation myths of a Roman city (London en New York: Routledge, 1991), 153-18.